At around 6:00 p.m. EST last night on May 12, Tesla CEO Elon Musk posted a tweet regarding Bitcoin and Tesla that appeared to be having a significant impact on the market. 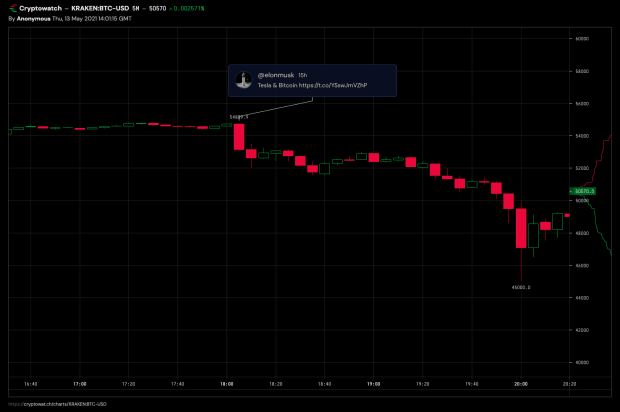 The tweet included a misstatement in its assessment of Bitcoin’s energy consumption. While Musk claimed that Tesla was “concerned about the increasing use of fossil fuels for mining and Bitcoin transactions,” the mining industry appears to be expanding in its use of renewable energy sources instead. He also appeared to suggest that Bitcoin transactions consume power, but this is not true.

Bitcoin energy consumption is not alarming

It’s important to remember what’s really going on here with the adoption of the Bitcoin network. With bitcoin, all energy production and consumption now has a separate economic cost. The problem that bitcoin solves is the separation of money and state. The reintroduction of free market currency will eliminate huge amounts of wasted energy, bad investment and destruction inherent in the existing petrodollar system.

Proof of work is crucial for Bitcoin, or more broadly, a decentralized monetary network (which only Bitcoin can claim to be). Only the proof of work function in the form of the SHA-256 hash algorithm can ensure that the most recent block has been exploited fairly, and not by malicious actors seeking to compromise the validity of the chain / network. This is (one of the many) killer features of Bitcoin. If you want to “attack” the network, you have to spend large amounts of energy and computing resources to do so, and the economic incentives therefore align with just supporting the network.

When a climate alarmist asks you to explain “Bitcoin’s alarming energy consumption,” ask them what the future will look like without Bitcoin. What is our world and our climate like without a separate economic cost for energy inefficiency and waste, and how do we propose to solve this problem otherwise?

In short, back to the market reaction …

The bitcoin market was sent on a downward spiral as speculators and leveraged traders quickly left their position, with the price of bitcoin falling to $ 45,000 before catching an offer and rebounding quickly. Coinalyze data shows nearly $ 1 billion in leveraged buyouts were liquidated directly after Musk’s tweet.

Does this event have a significant impact on the ultimate longevity or success of the Bitcoin network? Clearly, this is not the case. Bitcoin is the energy bidder of last resort on the entire planet, and the economic incentives provided by the network to achieve maximum energy efficiency cannot be underestimated and are grossly misunderstood.

Regardless, the Bitcoin network continues to grow, and weak hands and speculators who don’t understand Bitcoin have sold their BTC to doomed HODLers, who understand the attributes of Bitcoin’s healthy currency and are not shaken. by a tweet launching FUD (read: fear, uncertainty and doubt) from the CEO of a company that only recently became profitable thanks to massive amounts of environmental credits and government subsidies…