Institution of the first author: University of Tokyo

Despite attempts to probe the early stages of massive star formation, these critical phases are still shrouded in mystery. Massive stars (greater than 8 solar masses) enrich the interstellar medium with heavy elements expelled through stellar winds and eventually collapse and release more material through supernovae. This is why understand their training is essential to understand the whole feedback cycle within the Universe.

Massive stars form from dense “tufts” of matter. A promising area for hosting such clusters is the infrared black cloud IRDC 18310-4. In today’s article, the authors use the ALMA Investigate early stage 70 µm high mass dark clusters (ASHES) to examine the cloud and what may be hiding in it.

Getting to the heart of the matter

The authors start by examining an ALMA image of the cloud (see Figure 1), which shows the continuous dust emission to 1.3 mm. The main cloud is in the center, the brightest part of the image, going northeast to southwest. The outlines in white trace the emission and concentrate in the areas where it is highest.

Using this image and specific requirements for brightness and spatial separation, the authors determine that there are 11 nuclei in the cloud, which are marked in Figure 1 by cyan ellipses. They label the brightest nuclei ALMA1-8 and the other sub1-3 nuclei. These nuclei are important because they are the most likely sites for the future (or perhaps even current!) Formation of massive stars.

Figure 1. Emission of the ALMA dust continuum at 1.3 mm. The contours show the increasing flow in the cloud, which extends diagonally from the upper left corner to the lower right corner. The cyan ellipses mark the 11 tufts (labeled ALMA1-8 and sub1-3) that could harbor the early stages of massive star formation. See Figure 2 in the document.

The authors also examined different molecular emission lines in the cloud, which allowed them to estimate the properties of each core. Emission lines help determine the temperature of the gas because the presence of more energetic emission lines means the gas is hotter. The mass of the nucleus was also determined using the speed dispersion molecular lines. In addition, previous studies have shown that molecules like CO and SiO trace exits and shocks. 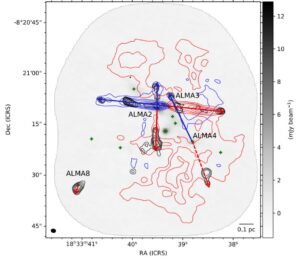 Figure 2. The same image as Figure 1, but in grayscale. The red and blue contours show the CO emissions shifted towards red and blue. The black contours trace the emission of SiO. The arrows show the outputs of inferred materials present in ALMA2, ALMA3, ALMA4 and ALMA8. See Figure 9 in the document.

ALMA2, ALMA3, ALMA4, and ALMA8 all have material exits, shown by red and blue arrows. ALMA3 has the longest and fastest outflow, which is horizontal in Figure 2. After examining the cores with individual position-velocity diagrams, the authors found that all of these active clusters except for ALMA8, showed signs of episodic outflows. This means that a large fraction of massive protostars can undergo distinct episodes of accretion and ejection of matter.

The authors of today’s article classify cores into three main groups based on their measurements of molecular emission lines.

1) Protostellar nuclei which have both high temperatures and flows: ALMA2, ALMA3, ALMA4 and ALMA8.

2) Protostellar nucleus candidates which have high temperatures but no outputs: ALMA1 and ALMA5.

3) Candidates for the prestellar nucleus who have neither high temperatures nor flows: ALMA6, ALMA7 and sub1-3.

Basically, the higher the temperature, the older the protostar, as it heats up the surrounding material in the tuft as it evolves. ALMA8 has the highest core temperature, so it’s probably the most evolved. The protostellar nucleus candidates could represent an extremely early phase of star formation before the onset of flows. Candidates from the prestellar nucleus might one day start forming protostars, but for now it’s probably just clusters of gas and dust.

Looking to the future with ASHES

Although this is only a single cloud study, the full ASHES project will explore many similar structures and may enable statistical studies of the early stages of massive star formation. This will help determine how and where massive stars are formed, a crucial aspect in understanding how the universe evolves.

I am a third year PhD student at the University of Wyoming, where I use polarimetry and spectroscopy to study the magnetic field and dust around Bowshock nebulae. I love science communication and finding new ways to introduce people to astronomy and physics. In addition to stargazing in the clear Wyoming sky, I also enjoy hiking, backpacking, running, and skiing.